There are some things that are quintessentially New York: Elaine’s, the (now defunct) CBGBs, Central Park, Washington Square Park and of course, the ubiquitous sounds of upstairs neighbors in your pre-war apartment. I used to joke that the woman above me had a pony running around up there. I heard her at all hours of the day and night, convinced she wore hooker heels to bed at night. There are also the occasional funky sounds of music scales being practiced and some DJ mixing. Nothing too overbearing, as there would be long stretches of silence in between the pony-clodding, but enough that anyone who comes over makes a joke about it.

I finally met my neighbor this evening when I noticed a sudden rainstorm had started coming from my bathroom ceiling. This has happened once before, luckily this time, however, the water was (somewhat) clear. Since the bathroom rainstorm was bordering on a hurricane, I ran upstairs to see what my neighbor was up to, to cause so much gushing. 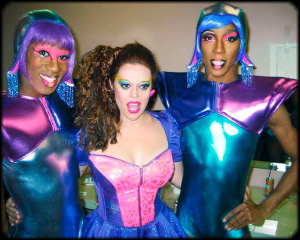 When I knocked on her door, a woman of an undetermined age (ranging early 40s-early 50s) answered. She had a punk rock meets Rizzo & the Pink Ladies look, spandex leggings, a black fitted cotton polo shirt with a hand-stitched leopard fur collar that was offset by her wildly frizzy hair and olive skin. The first thing she said to me was, “you have water leaking into your apartment too, don’t you?” and opened her door wide enough for me to enter and follow her inside.

Forget the water for a minute, I know I did. I love looking in people’s apartments, but hers now tops my list of crazy residences. I swear I stepped into the Culture Club, circa 1984. The living room walls were neon green, which contrasted nicely with two electric blue bookcases, a dingy white shag rug, and a white Formica console table fashioned to hold her DJ turntables and vast record collection. The small glimpse I got of the kitchen revealed hot pink walls and framed music posters and album covers, all featuring a younger version of the woman standing before me. As we made our way into the bathroom, I saw a closet full of crazy neon colored outfits and a wardrobe of what can be best described as costumes the Jetsons might wear — I don’t think a cross-dresser or a stripper would even wear some of the stuff in her closet.

When we entered the bathroom, I had to look beyond the fire engine red walls and glossy black painted cabinets to see that her ceiling was also gushing like a tropical storm, that happened to be fixed in one spot. We inspected the damage, lamented on the state of the building and the super. As I left her apartment, I noticed the name “Lady Miss Keir,” written on the various posters and records hanging on the apartment walls. As soon as I hit my front door, I entered her name into Google and here’s what I our friends at Wikipedia had to say about Lady Miss Keir:

“Lady Miss Keir was the lead singer of pop band, Deee-Lite, a House andClub/Dance group formed in New York City. Their best known single is “Groove Is in the Heart“, from their 1990 debut album, World Clique. However, Deee-Lite achieved longer lasting success on the U.S. Billboard Hot Dance Club Play chart, where they scored six number-one hits. Lady Miss Keir still tours the world today as both a solo act and International DJ.”

Clearly the next thing that popped into my head was:

I also found her website, where it occurred to me there was something I could do about all of the noise, I could click on her tour page and see when she’d be out of town next, knowing, in advance, when I could expect silence. And, what do you know, in two weeks she’ll be in Russia! Then Finland and Vegas and on and on. I can now anticipate when to expect expect an increase in vocal exercises and DJ-i(before upcoming concerts) and when I can look forward to not being awakened at 3 am to sounds of high heels stamping around in the bedroom above. I’ve bookmarked the website to keep tabs on her. Since I’m sure she has a Google alert set to any mentions of her name, Lady Miss Keir: a special shout out from your downstairs neighbor: I have now downloaded “Groove is in the Heart,” and single-handedly increased your royalty check by 12 cents. After all, what are neighbors for?

Tagged deee-lite, groove is in the heart, it's raining bathrooms, lady miss keir, manic monday, only in NY

I spent the evening at Columbus Circle’s Jazz at Lincoln Center in the beautiful Allen Room. I met a friend there to see the Punch Brothers play — a group of good-looking and extremely talented 20-something musicians. I have a small crush on Noam, the banjo player, but an even larger crush on the Allen Room itself. There’s something both intimate and vast about the space. It’s like your brain can’t decide how to classify the size because of the incredible view of Columbus Circle, Central Park, the uptown skyline. The “spectacular-ness” of the night increased when, just as the music slowed down, the evening’s special guest, the eclipse, covered the moon.

Nature, music and the urban energy all combined to create a truly magical moment, where only the lights of the city and rose glow of the stage spots looked like candles in the ink black night. One of those moments that reminds me of why I love New York.

Talkin’ About No Generation

“’I don’t have a generation,” said Suzanne Vale, exasperated.

“Well then I think you’d better get one,” replied Marty Wiener.”‘

-Carrie Fisher’s Postcards From the Edge.

I was born in 1981, under a new president, a new decade and a few years before MTV hit the airwaves. I can identify with most everything that falls under Generation X, but they seem to scoff at the notion of including any children of the 80s in their club. On the other hand, I can’t really relate to Generation Y, my sister’s generation (1982-1997), because I didn’t spend my ultra-formative years on a computer, watching reality tv or thinking I didn’t have to work as hard as my parents to succeed.

At our multi-generational gathering in the Meatpacking District the other evening, I talked with Jeff Gordinier, author of the upcoming book, X Saves the World: How Generation X Got the Shaft but Can Still Keep Everything From Sucking. When defining Generation X, Jeff turned to what most other Gen Xers would, Wikipedia.com and averaged it out from about 1962-1977. What happens to those in the middle? They’re just hanging out on the cusp?

Which leads me to the idea that perhaps people in these “cusp years,” are more likely to wonder about their identity and feel without focus throughout their lives. Are we a part of the generation that’s making a difference? Or are we “all about Me?” And if we are truly in the middle, how do you strike a balance between the two, giving back, but still thinking about yourself? Perhaps that’s just part of the eternal struggle in every individual and not a generational thing at all. Still, it would be nice to not always feel like I’m on the edge. I’d like it if someone handed me one of the many road maps we use to navigate in a lifetime. It might make the trip feel a little more Hollywood and a little less like a Robert Frost poem.