If you check out my life list, you’ll see it’s a work (life) in-progress. This year, my goal is to cross five big things off my list. #43, Follow the Diaries, has been 93 years in the making. Here is the story.

In 2005, I was wandering through an antique store in Nyack, New York when I came cross three diaries … 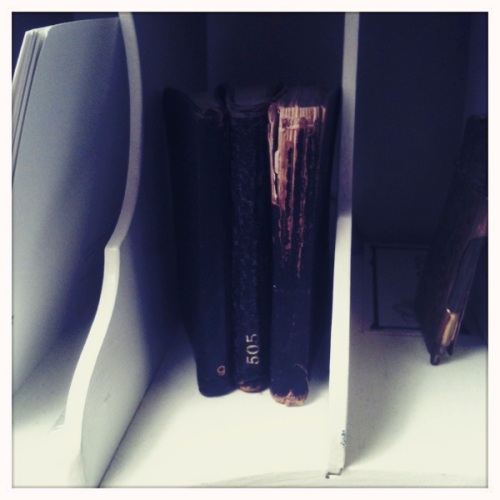 One is from 1914, then 1921, and lastly, 1923. The diaries belonged to Raymond Enders of 27177 Washington Ave, Bronx, New York (and later of 254 East 184th Street). He was an employed by the Italian Discount & Trust Company, a bank, located at 399 Broadway, New York City. The New York Times announced the bank’s establishment in July of 1918. Further history on the bank can be found here and here. 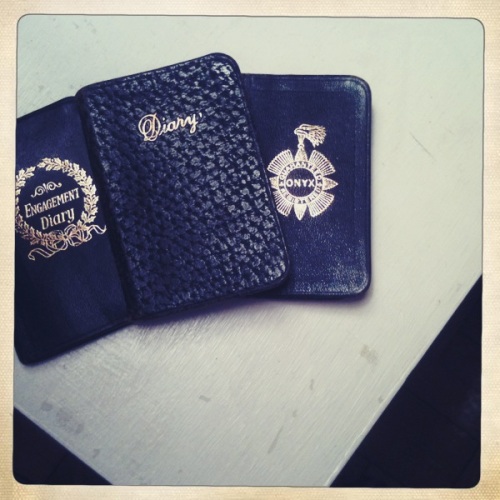 When I opened the well-worn diaries, I found every page filled with tiny, black-inked handwritting. It’s cramped and sometimes hard to read, but every day is carefully accounted for, right down to the weather report. 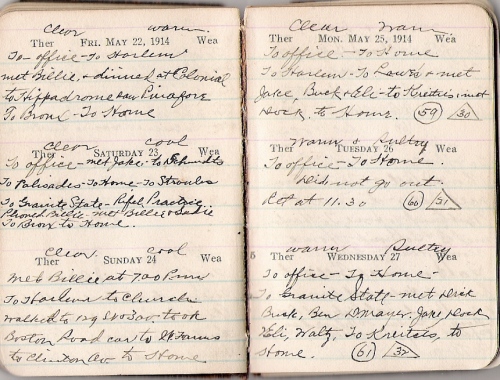 I purchased the three diaries for $20, took them home and began to read. Raymond’s life was ordinary. He went to work, he went home, he sometimes went out on dates or to the theater or bowling. I never finished reading the diaries, but they’ve always sat on a shelf in my secretary desk waiting for me to open them.

This past November I began looking through them again. New details caught my eye. Buildings in Manhattan I never knew existed (and are no longer around today), walks through Central Park on the same date I had walked through it, 92 years later. The ghosts of Raymond’s footsteps mingling with my solid, present ones.

I began to wonder more about Raymond Enders and the New York in which he lived — so very different and yet similar to the one I inhabit today. Where did he come from? How did he get to where he was? Did he ever fall in love? Get married? Move out of New York? I also wondered about our shared city. New York is filled with beautiful old buildings, most of which managed to stand the test of time and prime real estate, but other brick and mortar structures weren’t so lucky. I began to Google some of the places Raymond wrote about and discovered a New York I never knew, one that only exists in books, the archives of the New York Times or in the memories of the city’s oldest residents.

Just as Raymond spent time documenting his life on paper, I spend mine typing words into the ether of the internet. Both methods of our documentation might eventually disintegrate, but for now, I want to breathe some new, virtual life into Raymond’s words. I want to see New York through his eyes and his footsteps.

Every two weeks (or one month, depending on how active he was), I’ll document two weeks (or a month) in the life of Raymond Enders, either by visiting specific locations he mentions in his diaries or researching the ones that no longer exist, and writing about them. I’m hoping some friends or New York experts might be able to assist me with filling in the blanks … or at least help me read his handwriting. Whatever happens, the journey will be fun and a life will be relived, as I live out my own.

The weekends I spend out of Manhattan make me itchy, like I need to get back, as if there’s something I’m missing or forgetting to do. It takes me at least a full day to unwind and shove those thoughts into the far recesses of my brain. 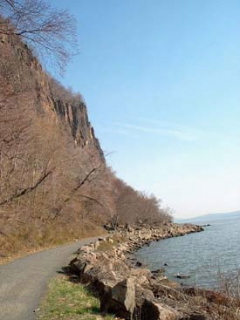 Though I spent most of the weekend working, I did take a break on Saturday to do some shopping and then, when the rain stopped, over to Nyack Beach/Hook Mountain for a walk on the cliffs overlooking the Hudson. I love walking there — it makes me feel like I’m in a Hudson River School painting. I went about a half a mile on the trail before the high winds whipped right through me, making my eyes tear to the point where I couldn’t see well enough to move on. I wisely turned around and shivered my way back to the car.

From there, I headed South on Broadway towards Runcible Spoon to warm myself with a nice cup of coffee. Because of the weather, the bakery wasn’t populated with the usual crowd of colorful spandex-clad cyclers stopping to refuel with a scone or one of “the ’spoon’s” famous morning buns.

On the way to Runcible, I past some fun local landmarks. The first being the old Victorian house we called, “The Sisters’ House.” Straight out of a scary movie, this creepy old rundown, but gorgeous home with gingerbread detail was owned by The Johnson family since the turn of the century. Alvin Johnson, the founder of The New School, lived in it with his wife and seven children until his death. After that, two of his daughters Astrid and Felicia lived in it together. Astrid was a batik artist and once made a beautiful scarf from my mother (which now hangs in my sister’s closet, when it isn’t holding back her hair.) Felicia became an economist and professor at the New School. She was also a master gardener (the results of which you could only see if you happened to brush aside the wild growth in the front and backyard — my mother called this the ’secret garden.’) When she was in her 70’s, Felicia became the first mayor of Upper Nyack, NY. winning by one vote with her door-to-door campaign. Both sisters died a few years ago and now someone is gutting the house and has wacked the weeds away. In the spring, I’m certain Felicia’s beautiful garden will awaken and finally be seen from the sidewalk.

A few houses away from the Sisters’ is “Pretty Penny,” the former home of the First Lady of Theater, Helen Hayes. My mother knew Helen towards the end of 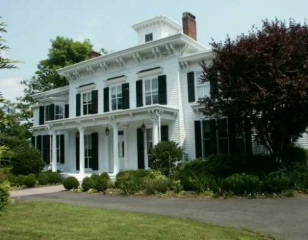 her life and I have vague memories of playing in the backyard of Pretty Penny and sitting by the pool. The house was incredibly rundown, as Helen was nearly 90 and not in a state to undergo a home renovation. But, it was still beautiful. Books lined the walls, an Oscar or an Tony could be found sitting here or there. Musty and a little frightening to a 10-year-old, but fascinating at the same time.

Ingrid Bergman sought refuge at Pretty Penny after her affair with Roberto Rossellini came to light; Kate Hepburn played tennis on the court while Helen’s husband, Charles, drank on the porch with Spencer Tracy.

When she was 90, Helen wrote her autobiography, a copy of which sits in my parent’s living room bookcase, the shaky inscription written out to my mother. I remember Helen’s funeral a few months later and the hundreds of people who attended, pouring out of the small Nyack church. A year or so later, Rosie O’Donnell purchased the house, gutted it and returned it to its original splendor. Then, she built a seven foot high wall around it, planted 12 foot tall trees and moved out a few years later to a “compound” off the south end of Broadway, about a mile down the street. Now, all that can be seen of Pretty Penny from the street is the hawk’s nest and the main chimney. 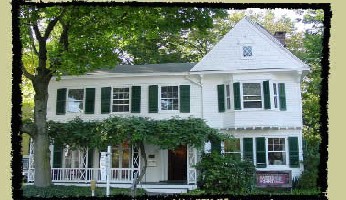 Right before Main Street sits the Edward Hopper House. Birthplace and childhood home of, you guessed it, E. Hopper. Now, it’s a cute little gallery exhibiting local artists and local collector’s art. Rumor has it four-year-old Edward would sit on the front porch with his watercolors, painting the neighbors as they walked by.

Further down Broadway past main street is Carson McCullers’ house. As requested in her will, the house is being used as an artist’s residence. McCullers lived here from the mid-1940’s till her death 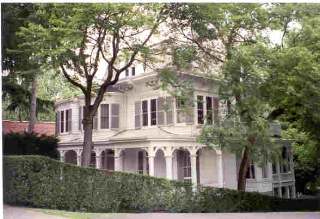 in the late ’60s. It’s a pretty place, set back from the street and flanked by a baptist church and a medical professional building — both somehow fitting for her.

After South Broadway, I head towards River Road and through the town of Upper Grandview, passing “the Storybook house,” a home built in the 1920’s by a couple fascinated with the medieval period (as illustrated by the stone cottage’s design and interior decor.) The husband and wife were authors and so inspired by their home, they created a series of books for children all taking place in the stone house. There’s even a waterfall starting right at the home’s foundation and running down the front of the rocky hillside and into a ravine below.

A few doors down and I pass the home of yet another author, Toni Morrison, whose windows were custom-blown in a pink/orange shade to mimic the dawn and dusk light that comes off of the Hudson. So, no matter what time of day, the inside of her house has a warm, rosy glow.

I continue on down the road and enter into the village of Piermont, warmed from both my coffee and the trip down memory lane, ghosts in tow.